…The truble with Geller

As a child I was interested in magic, and learned from everything I could to glean information. I started performing at the age of 12.

I was taught to keep the magic secrets, but did not really understand why. When I was a child, I also heard about Uri Geller, the Israeli phenomenon, I did not see him actually perform, although he was on television once in a while. I heard stories from both spectators and magicians. I knew that Geller used tricks and illusions that misled the public.
During the children shows I occasionally performed, kids sometimes discovered my secrets (I was pretty bad at the time, probably) and I felt I had to lie to them in order to protect the secret of the trick. It upset me. At the age of 16 I did not like to lie. I decided to stop doing magic tricks. At the same time, I did deal with spiritual, metaphysical, "supernatural" ideas. I felt the drive to explore them and find the truth behind the illusions we see and experience on a daily basis. At some point I dropped the search and left it for later years…

To tell the TRUTH through the LIE

I returned to magic at the age of 22 to use it as a tool for expression, as an artistic way that brings a theatrical aspect and a miraculous means of expressing the spiritual experiences that people go through in a tangible way. I also discovered that there is no need to lie. On the contrary, the very word magician contains within it this truth:

The art of magic is the most decent art: you promise the audience that you will fool them and then you do exactly what you promised

I studied in Los Angeles at the Academy of Magic Arts, alone, in workshops, in private lessons with some of the greatest magicians, and I also spiced it up with theater and acting studies.

As part of my training in the art of magic, I learned that there are quite a few people who use professional tricks to deceive people in many areas such as card fraud, "games of chance", cheating, hypnosis, and the "supernatural" subject in all its forms – telepathy, divination, ESP, reading Thoughts and apparent "control" over the material world.

I discovered that there are magicians who exploit their audience's ignorance and encourage them to believe in superstitions, adopt misconceptions and adhere to principles that are clearly destructive.

I have long since learned that a person can solve the problems of his existence only when he is faced with data that is correct, i.e. real facts. Complications and errors almost always result from lies, from false-"knowledge" that hides the truth.

In short, I have decided that I am not among these magicians who use deception but a decent magician who honestly claims that he is fooling his audience… a skilled deceiver, a true liar, and so on.

In 1992, after finishing filming a TV series hosted by me ("Shin Kuf Resh" – ש.ק.ר the Hebrew word for "To Lie"), I met Uri Geller while on a tour of the country, I was on his show and then he invited me and my girlfriend then, who later became my wife and mother of my son (and later also my ex) , For a meeting in his room at the Carlton Hotel where he was staying.

Uri Geller was charming as usual and although I tried to talk about magic and tricks and how to do them he kindly ignored and asserted that what he was doing was real. (Although he knew I knew he was using tricks)

I explained to him that I had no intention of doing so and he thanked me and gave me his signed poster as a gift.

Uri Geller is looking for his Successor

Many years later, in 2006, when Kuperman Productions auditioned for the "Successor" program, I was invited to audition. I introduced a few things to the producers and we discussed the how-to question. I told them I did not want to inherit any degree from Mr. Geller, and would be willing to participate in the program only on the condition that I could tell the audience at home that these were illusions and tricks. They did not want it. I said goodbye and thank you.

The production preferred to mislead the home viewers. The word Magician became a derogatory name (the program was not even allowed to say the word magician). They took a number of friends, some of whom were former students of mine to attend the program. The participants created a "supernatural" Biography for themselves. (suddenly everyone there had a witch for a grandmother or an aunt who is a medium) The program kicked off with rating records.

After the season began, in my shows I still told the audience that what I do is tricks. But the people told me that what they are seeing on the program is real. They actually believed that what they see in the series "The Successor" is supernatural phenomena and powers, probably because the artists who participated in it omitted the important word "Magician".

I learned that many people, when they encounter things they are unable to understand, prefer to first believe that these are supernatural phenomena, meaning that they depend on factors outside the physical world. It disappointed me. How is it possible that sensible people who have already seen a trick or two in their lives, believe that they experience supernatural phenomena in Geller.

I also believe that there are many things that science has not yet discovered and may never be able to discover… but it was annoying to see that in order to receive recognition and publicity people need to cheat. My values ​​got a nervous twist.

The Magicians Association is violating its own laws

I sent letters to the show's production team. I sent an email to Uri Geller himself (he never replied to that email). I talked to people in the media. All this did not stop Uri Geller from continuing his false antics, such as offering the police to find famous rapist Benny Sela or offering to awaken Prime Minister Arik Sharon from his coma.

I decided to do something about it

I wrote an article about it and a friend of mine published it in London (an Israeli online newsletter in London).

I went to perform in the Caribbean at Christmas 2006 and when I came back and saw that no one had done anything about it I realized that I have no place in the Magicians Association that does not keep its own rules – the bylaws have a clause forbidding a magician to present himself as "supernatural".

After discussions with the association's management, I resigned from it in a demonstrative move and went to the media.

Following the article I published in London, Guy Pines' production team decided to open their season with an investigative article on "The Successor". In the program, they presented a survey that showed that over 70% of the viewing audience believed that what they see in "The Successor" are supernatural forces.

After the Guy Pines's show that revealed some of the magic secrets in "The Successor", the ratings dropped down by more than 15%.

The next day I called Geller's actions "scams" in Rafi Reshef 's show.

As a result of these actions, the ratings of the shows went down and shows like “Eretz Nehederet” made a lot of laughs at the expense of “The Successor”.

It is true that I believe in some way in rational thinking, logic and education, and I think the way things are presented and educated is of great importance. But more than that, I believe in something far more important than all of these. Something that miraculously is the complete opposite of all the illusions I do…

In one word: truth!

Why do people search for or are interested in the subject of "supernatural powers"?
They are actually looking for some truth hidden beneath their inability, failures, losses… and also truth behind the religions, beliefs, longings that are deeply ingrained. They seek to connect to a truth that is more fundamental than the lies that exist on the surface. I believe this is the important thing we all seek and strive to discover – the truth behind the illusions and the pretense. The truth that will set them free and free them from the prison of the everyday, the mediocre, the familiar and the known.

I have no problem with that, I can even say that I myself have an aspiration to find and discover such forces. True forces that will allow people to connect to the divine roots from which they may have been created. A desire to discover the truth that lies behind the great illusion of our existence. Truth that will set us free…

And that's precisely why I think it's so important to express this truth out loud: If Uri Geller tries to promote spiritual or “supernatural” ideas, and chooses to use tricks to prove those ideas, he is essentially producing the same thing he purports to free the world from: lies.

I do not pretend to know a higher "truth" than others and I do not display, even as a master of the senses or a mentalist, supernatural forces. I let people watch the phenomena I present and know that these are illusions – That I use natural means to create a supernatural experience.

And to you Mr. Geller, dear Uri, if by any chance you came to read this, know that I have no personal interest against you. On the contrary. It's for your benefit. Isn't it time you aspired to live with the truth?

Uri Geller aside, my disagreement with the Israeli Magician Society (ISPAM) still continues. They will not admit that they have acted against their bylaws. I wont take them to court. Its their own awkwardness they need to live with. May they grow values.

Love to you all! 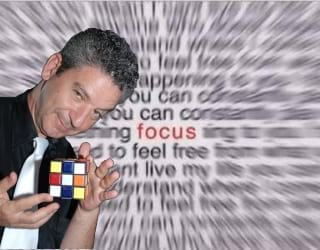 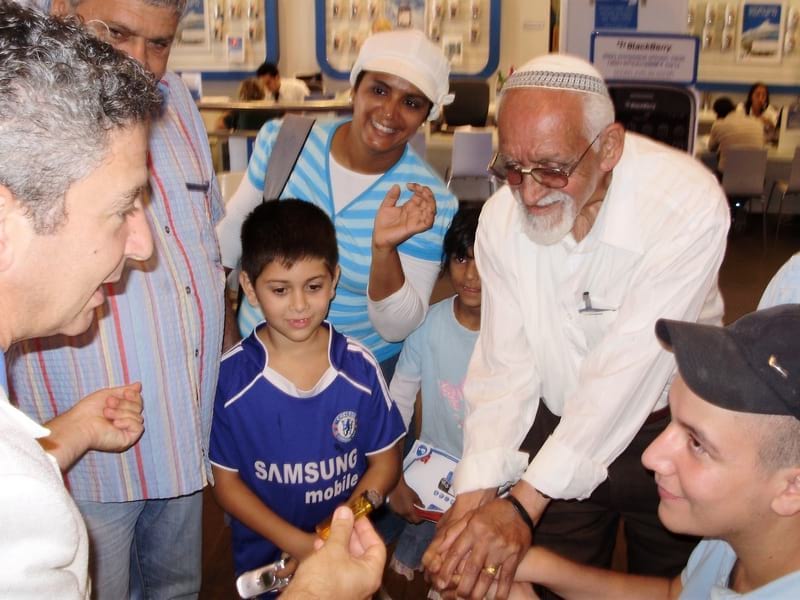 A true story that happened to me at an old-age-home as I was about to give them a lecture/talk on the subject of Happiness. The entire incident was very magical… 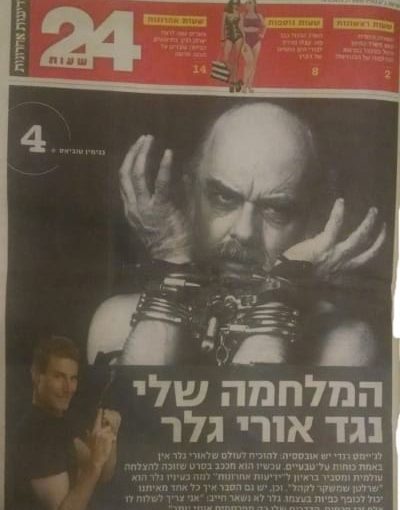 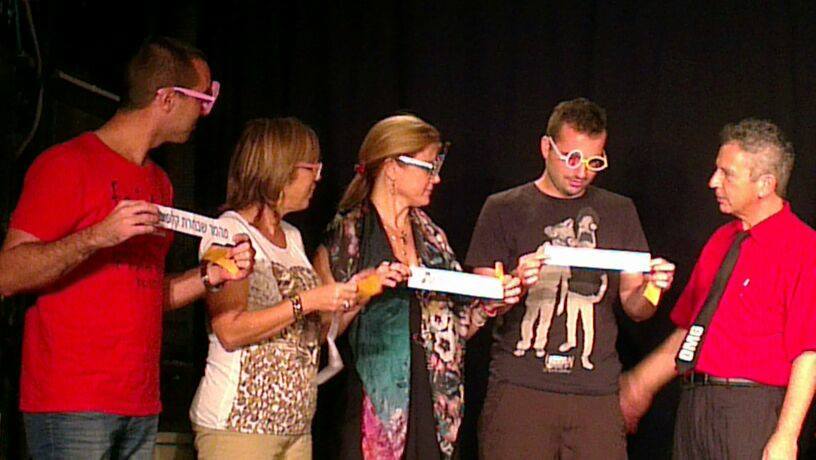